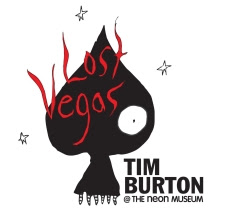 LAS VEGAS (August 2019) – The Neon Museum announces tickets are now on sale for  “Lost Vegas: Tim Burton @ The Neon Museum Presented by the Engelstad Foundation,” which will be on view Oct. 15 through Feb. 15 from 9 a.m. to 1 a.m. daily. Tickets will be priced at $30 for general admission to the Neon Boneyard and $24 for admission to the nighttime, projection-mapping spectacle “Brilliant!” No paired tickets or discounts will be offered for the duration of the exhibition. Tickets may be purchased at neonmuseum.org.

“Lost Vegas: Tim Burton@The Neon Museum Presented by the Engelstad Foundation” will comprise sculptural and digital installations celebrating Burton’s link to Las Vegas’ historical neon heritage. These artworks, many of which will be site-specific creations, will be displayed in the Neon Boneyard and incorporated into “Brilliant!” Works will play with the museum’s landmark sign collection, which was prominently featured in Burton’s film Mars Attacks! This irreverent homage to the sci-fi B-movies of the 1950s and 1960s and the disaster films of the 1970s unleashed gleefully destructive alien invaders upon gamblers, casino workers and Tom Jones. The presentation of Burton’s art in Las Vegas represents a unique experience where the host institution also serves as creative inspiration. The museum’s distinctive campus will be transformed through the artist’s singular vision for this original exhibition. of new work as well as previously exhibited pieces.

Burton is widely regarded as one of cinema’s most imaginative and visual filmmakers. He has achieved both critical and financial success in the live-action and animation genres. Burton’s accomplishments in filmmaking are a consequence of his artistic eye. Long before becoming a director, he expressed himself through drawing and painting, which also became an integral part of his creative process. Burton’s past exhibitions have drawn millions of patrons around the world in cities such as Melbourne, Los Angeles, Paris, Prague, Tokyo, São Paulo and Mexico City.  His exhibition at MoMA in New York City drew over 800,000 visitors, making it the third most attended exhibition ever.

ABOUT THE NEON MUSEUM
Founded in 1996, the Neon Museum is a non-profit 501(c)3 organization dedicated to collecting, preserving, studying and exhibiting iconic Las Vegas signs for educational, historic, arts and cultural enrichment. It has been named “Best Museum” by Las Vegas Weekly, one of “Sin City’s Best Retro Sites” by MSN, “No. 1 Las Vegas Museum Sure to Entertain and Educate” byUSAToday’s 10best.com, “One of the Top 10 Coolest Things You Didn’t Know You Could Do” by Forbes.com, one of the “Top 10 Historic Spots in Las Vegas” by Vegas.com; one of “15 Most Fascinating Museums in the U.S.” by VacationIdea.com; and earns a consistent 4.5 out of 5 rating on TripAdvisor. On its 2.27-acre campus, the Neon Museum houses an outdoor exhibition space known as the Neon Boneyard (“boneyard” is traditionally the name for an area where items no longer in use are stored); the North Gallery, home to the nighttime augmented-reality, audiovisual spectacle, “Brilliant!”; the Boulevard Gallery outdoor exhibit space; and its visitors’ center, housed inside the former La Concha Motel lobby. The museum collection also includes nine restored signs installed as public art throughout downtown Las Vegas. Public education, outreach, research, archival preservation and a grant-funded neon sign survey represent a selection of the museum’s ongoing projects. Both the Neon Boneyard and the La Concha Visitors’ Center are located at 770 Las Vegas Blvd. North in Las Vegas. Click here for tour schedules and pricing information. Follow on Facebook, Instagram and Twitter.