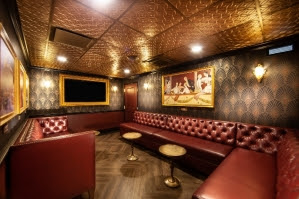 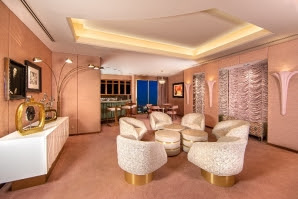 “The Mob Museum’s exhibits provide unexpected insights into Mob history with a focus of the evolution of Las Vegas—and the El Cortez has stood witness to much of that evolution,” said Jonathan Ullman, president and chief executive officer, The Mob Museum. “For guests fascinated by the city’s past, this distinctive, Downtown Las Vegas getaway will surely be appealing.”

Guests will enjoy two nights’ accommodation in the immaculately preserved suite, which was the home of the late casino magnate Jackie Gaughan beginning in 1980. A bookmaker from Nebraska, Gaughan had relocated to Las Vegas in 1950 and bought a stake in the Flamingo. At that time, being in the casino business meant regular contact with the city’s organized crime figures. In fact, with the purchase of the El Cortez in 1963, Gaughan “inherited” aging mobster Irish Green because former El Cortez owner Bugsy Siegel had promised to house him at the hotel for life.

At The Mob Museum, guests will receive two Premier Passes, including general Museum admission plus access into the Firearm Training Simulator and the Crime Lab and a guided tour with Geoff Schumacher, senior director of content. Plus, guests will enjoy an immersive Prohibition history experience in the Museum’s Underground. Here, they will discover the intriguing stories behind Prohibition in America and how it led to the proliferation of organized crime—which played an undeniable role in the development of Las Vegas later in the 20thcentury. Guests will explore exhibits and authentic artifacts, as well as enjoy two hours in the exclusive, hidden Fitting Room VIP area with $100 food and beverage credit, plus a private, guided distillery tour and moonshine tasting with a Museum distillery staff member. The in-house distilled moonshine is as smooth as it can get, made with 100 percent corn and bottled at 50 percent ABV.

“This amazing VIP package represents the evolution of a successful long-term partnership between El Cortez and The Mob Museum,” said Adam Wiesberg, Assistant General Manager of the El Cortez. “Both organizations cherish and preserve the rich history of this great city so we couldn’t ask for a better partner.”

The full package is designed for two guests with a maximum of up to four guests; components follow:

ABOUT THE MOB MUSEUM
The Mob Museum, the National Museum of Organized Crime and Law Enforcement, a 501(c)(3) non-profit organization, provides a world-class, interactive journey through true stories—from the birth of the Mob to today’s headlines. The Mob Museum offers a provocative, contemporary look at these topics through hundreds of artifacts and immersive storylines. Whether you like it or not, this is American history. It debuted a major renovation in 2018, including a Crime Lab, Firearm Training Simulator and Organized Crime Today exhibit as well as The Underground, a basement-level Prohibition history exhibition featuring a speakeasy and distillery, and sponsored by Zappos. The Mob Museum has been awarded accreditation by the American Alliance of Museums, the highest national recognition afforded U.S. museums. Since opening in 2012, The Mob Museum has accumulated numerous accolades, including being named one of TripAdvisor’s “Top 25 U.S. Museums,” Nevada Magazine’s “Best Museum” and “Best Place to Get Married,” one of Las Vegas Weekly’s “Twenty Greatest Attractions in Las Vegas History,” one of Hotel.com’s Top 7 “Travel Brag Landmarks,” USA Today’s “Best Museum in Nevada” and one of its “12 Can’t Miss U.S. Museum Exhibits,” “A Must for Travelers” by The New York Times and one of “20 Places Every American Should See” by Fox News and Budget Travel magazine. The Museum is a two-time winner of the Mayor’s Urban Design Award for Historic Preservation and Adaptive Reuse. Its house-distilled moonshine received top honors, the Double Gold Award, from The Fifty Best. General admission is $26.95 for adults ages 18 and over with special pricing for online purchase, children, seniors, military, law enforcement, Nevada residents, and teachers. The Museum is open daily; visit the website for up-to-date operating hours. For more information, call (702) 229-2734 or visit themobmuseum.org. Connect on Facebook atfacebook.com/themobmuseum or Twitter @themobmuseum.

ABOUT EL CORTEZ HOTEL & CASINO
El Cortez Hotel & Casino is the longest continuously operating hotel-casino in Las Vegas. The iconic property can be found in historic downtown Las Vegas at 600 East Fremont St. and is the only casino in the city’s burgeoning Fremont East Entertainment District.  With over 300 remodeled hotel rooms, El Cortez offers some of the best accommodations in downtown Las Vegas. In February 2013, the historic hotel was named to the National Register of Historic Places. The El Cortez casino features full-pay 3-2 single deck blackjack, 10 times odds on craps, state-of-the-art roulette and just under 1,000 slot machines.  El Cortez also offers a full range of sports betting options and is proudly affiliated with the Station Casinos Sports Book. Dining options at El Cortez include: Siegel’s 1941 and The Parlour, featuring an exclusive “Morning Noon and Night” menu and live entertainment, Naked City Pizza, Eureka! and Shinya Maru Ramen.