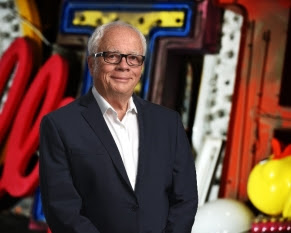 LAS VEGAS (June 2019) – The Neon Museum is pleased to announce the recent hiring of Bruce Spotleson as vice president of fund and partner development. In this role, Spotleson will be driving corporate and individual support for the organization.

Spotleson has had a distinguished career in Las Vegas, most recently serving as director of corporate partnerships for Vegas PBS. Prior to that role, he was group publisher for Greenspun Media Group, where he was instrumental in the launch and development of numerous local publications focused on the Southern Nevada community. Before relocating to Las Vegas in 1996, he was publisher of the Tahoe Daily Tribune. During his time at the publications, his weekly newspaper column earned three first-place writing awards from the Nevada Press Association.

Spotleson currently sits on the executive committee of the Las Vegas Metro Chamber of Commerce, served as chairman of its Board of Trustees in 2014, is a past president of the Business Council and is a graduate of the Leadership Las Vegas class of 1999. His intimate knowledge of the Las Vegas community will greatly contribute to the Museum’s efforts moving forward.

ABOUT THE NEON MUSEUM
Founded in 1996, the Neon Museum is a non-profit 501(c)3 organization dedicated to collecting, preserving, studying and exhibiting iconic Las Vegas signs for educational, historic, arts and cultural enrichment. It has been named “Best Museum” by Las Vegas Weekly, one of “Sin City’s Best Retro Sites” by MSN, “No. 1 Las Vegas Museum Sure to Entertain and Educate” byUSAToday’s 10best.com, “One of the Top 10 Coolest Things You Didn’t Know You Could Do” by Forbes.com, one of the “Top 10 Historic Spots in Las Vegas” by Vegas.com; one of “15 Most Fascinating Museums in the U.S.” by VacationIdea.com; and earns a consistent 4.5 out of 5 rating on TripAdvisor. On its 2.27-acre campus, the Neon Museum houses an outdoor exhibition space known as the Neon Boneyard (“boneyard” is traditionally the name for an area where items no longer in use are stored); the North Gallery, home to the nighttime augmented-reality, audiovisual spectacle, “Brilliant!”; the Boulevard Gallery outdoor exhibit and event space; and its visitors’ center, housed inside the former La Concha Motel lobby. The museum collection also includes nine restored signs installed as public art throughout downtown Las Vegas. Public education, outreach, research, archival preservation and a grant-funded neon sign survey represent a selection of the museum’s ongoing projects. Both the Neon Boneyard and the La Concha Visitors’ Center are located at 770 Las Vegas Blvd. North in Las Vegas. Click here for tour schedules and pricing information. Follow on Facebook, Instagram and Twitter.