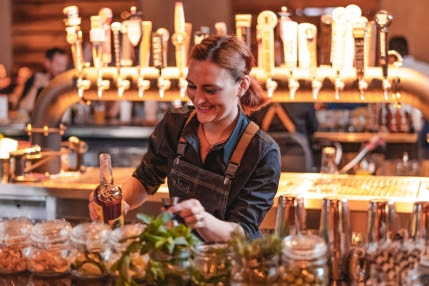 A bartender mixes one of Eureka’s signature cocktails.
(Photo Courtesy of Eureka!)

LAS VEGAS (July 2019) – Supporting the proliferating craft beer scene in Las Vegas is not only a priority for downtown’s Eureka! but also a point of pride for the dynamic restaurant and bar in the heart of Fremont East. To highlight the region’s bustling local brew scene, the restaurant spotlights a different brewery every Wednesday for “Steal the Glass.” For this weekly occasion, Eureka! partners with a local craft brewery to create branded glassware for guests to take home when they order the featured craft beer of the day. The experience can include one featured beer or a “tap takeover” where the brewery taps multiple beers from a featured brewer. “Steal the Glass” takes place from 6 p.m. to 12 a.m. every Wednesday while supplies last.

Of the 40 craft taps at Eureka!, more than half belong to local breweries that brew-seeking Las Vegans continue to support such as CraftHaus, Hop Nuts Brewing and Tenaya Creek Brewery. From balanced malts to hop-heavy profiles, the tap collection features lager, IPA, wheat, stout, cider and everything in between. The menu also includes seasonal varietals, special brews, Hawaiian lagers and the Eureka! staple Orange Wheat from Hanger 24 Craft Brewery in Redlands, California, the location of the brands first-ever restaurant.

“Offering the variety of local brews that we have allows us to give guests a ‘Las Vegas a beer tour’ where they can try all of the outstanding brews that the city has to offer in one place, while also acting as an additional purveyor for the smaller breweries to expose their small-batch brews to a larger audience. It’s a win-win,” says Stephen Farmer, general manager, Eureka!.

Guests can also enjoy the restaurant’s daily “Hoppy Hour” available from 3 p.m. to 6 p.m. and 10 p.m. to close. “Hoppy” Hour specials include:

The craft beer selection is complemented by the restaurant’s extensive cocktail program featuring original cocktails and hard-to-find whiskeys. The small batch whiskey menu is longer than most restaurants’ entire liquor collection, featuring nearly 40 bottles of rare bourbon, rye, single malt and wheat varietals. These whiskeys can be enjoyed in one of Eureka’s! specialty cocktails such as the “Penicillin,” which features smoked whiskey, ginger, honey and lemon or served neat.

For more information about Eureka! Las Vegas, go to  www.EurekaRestaurantGroup.com/Locations/Las-Vegas/.

ABOUT EUREKA!
Eureka! is the all-American restaurant in Downtown Las Vegas, featuring an all-scratch kitchen and one-of-a-kind bar specializing in craft beer and small-batch spirits. Located inside the historic Emergency Arts Building, featuring a rustic industrial environment, Eureka! proudly serves an imaginative menu spotlighting locally sourced produce, all cooked to order. The beverage program exclusively features American craft beer, small-batch whiskey, house-aged barrels and specialty cocktails sourced from artisans throughout the country. In addition to its food and cocktails and exceptional hospitality, ongoing specials and events include “Hoppy Hour” every day from 3 p.m. to 6 p.m. and 10 p.m. to close; half off wine-by-the-glass every Tuesday; “Steal the Glass” every Wednesday, featuring a different Southern Nevada-based brewery; live entertainment every Thursday and Saturday and Weekend Brunch on Saturday and Sunday from 10 a.m. to 3 p.m. With the term “Eureka” defined as expressing delight in finding or discovering something, as the true “anti-chain” chain, Eureka! takes pride in its deliberate pursuit of genuine connections with its guests and community. Eat Drink American! For more information, go to www.EurekaRestaurantGroup.com.