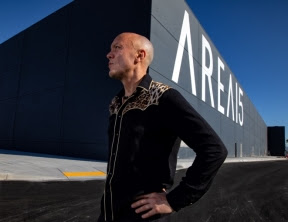 Wink brings his unique brand of creativity and decades of industry experience to this newly-established position, in which he will be responsible for curating content for AREA15’s numerous experiential activations, which range from one-of-a-kind art installations and cool hang-out spaces, to unique retail areas and inspiring food and beverage offerings. He will be responsible for adding creative flourishes and aesthetic cohesion to the design of The SPINE, a vibrant and ever-changing public corridor running through the center of AREA15. Working closely with AREA15’s partner experiences, Meow Wolf, Nomadic, Emporium and others yet to be announced, Wink will curate the visitor journey throughout the 200,000 square foot complex. Finally, Wink will draw upon his public speaking skills to serve as a global ambassador for the brand. In his new position, he will work closely with Michael Beneville, chief creative officer, AREA15 and founder, Beneville Studios.

“Chris is a visionary whose creativity knows no bounds. His addition to the team delivers on our commitment to collaborate with the world’s most creative minds,“ says Beneville. “We are bringing to life a concept that ‘does not exist’ and when we met with Chris and explained our vision, he just got it. Wink is a perfect fit for this mad-capped caper and we promise when AREA15 opens, it will be magical!”

Wink is primarily known for being the co-founding performer, writer, director and composer of Blue Man Group, the ground-breaking show combining theatrics, art, music and technology to create a wildly interactive, percussion-driven multi-media experience. He is also known for co-founding the New York City-based Blue School, which promotes creativity and emotional intelligence in students ranging from pre-school through eighth grade. He is an award-winning writer and performer, Grammy-nominated composer and a frequent public speaker on the subject of creativity.

“’Holy s**t, we got Chris Wink!,’ that is what I thought when he decided to join the team,” says Winston Fisher, chief executive officer, AREA15. “Chris brings his unique perspective and unbridled creativity to a team that is already best in class. Clearly, he is a gifted storyteller and a master at understanding audience behavior and developing concepts and experiences that appeal on a global scale, we are incredibly fortunate to be able to collaborate with him moving forward.”

“Blue Man Group allowed me to devote my professional life to inspiring creativity in all facets of life,” concludes Wink. “When I stepped away in 2017, I took time to determine what my next chapter would be. I regularly encountered talented artists and heard exciting ideas every day but I was attracted to AREA15 because its team comprises the right mix of not only creativity, but also business sense to ensure the complex achieves worldwide success. When I met with AREA15, I quickly knew it would be my next move. And… I also love my title!”

ABOUT AREA15
AREA15 is an experiential retail and entertainment complex offering live events, immersive activations, art installations and much more. The complex will attract locals and tourists of all ages seeking an ever-changing landscape of new and unique experiences. AREA15 is the development project led by a joint venture between real estate development firm Fisher Brothersand creative agency Beneville Studios, both of New York. AREA15 is located at 3215 South Rancho Drive in Las Vegas. For more information visit www.AREA15.com and follow on Twitter and Instagram: @AREA15Official; Facebook: AREA15LasVegas and YouTube: AREA15. Clickhere to download high-res renderings.